In addition, why not enjoy all or parts of the video below.  Even if your Hebrew is limited to non-existent, this just-uploaded, live-streaming video of the President of Israel’s nationally broadcast ceremony celebrating Israel’s 68th Independence Day will give you a flavor of Israeli national life. Towards the end, of course, will be the singing of the Israeli national anthem – HaTikvah – The Hope.

The day before Yom HaAtzma’ut – Israeli Independence Day – is Yom HaZikaron – Israeli Remembrance Day. The Knesset (parliament) in Israel officially designated this as “Remembrance Day for Fallen Soldiers and Victims of Terrorism.”

In 2016, Yom HaZikaron begins at sunset on Tuesday May 10th.

Appropriate observances include relevant readings during services and study of Israel’s history and the sacrifices made by so many. One might light a Yahrzeit candle, recite El Maleh Rahamim and also, with a Minyan, Mourner’s Kaddish.

The highlighted terms above include links to www.myjewishlearning.com – a great site for information about all facets of Jewish life, religion, peoplehood, history and Israel.

Here from 2015 is a poignant, personal teaching about Yom HaZikaron. 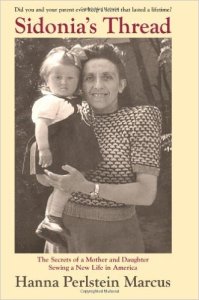 It’s not too late to catch up with our latest congregational book discussion selection – SIDONIA’S THREAD by Hannah Perlstein Marcus.  Click here for the author’s blog.

We’re meeting at Carol G’s on Tuesday evening May 17th at 7:00 PM.  Message me if you need to know how to RSVP.

Did you and your parent ever keep a secret that lasted a lifetime? When Hanna Perlstein and her mother, Sidonia, come to Springfield, Massachusetts from a displaced persons camp after World War II, they know no one in America. With no other family, except each other, they build a world that revolves around Sidonia’s extraordinary talent with a needle and thread to create beautiful garments while Hanna serves as her dutiful model. As Sidonia becomes well-known in western Massachusetts and northern Connecticut for her remarkable sewing talent, she continues to keep her inner secrets about her past hidden not only from her daughter but from everyone else. Determined to craft a life of pride, self-reliance and perseverance, Sidonia teaches her daughter to “stand up straight” in fashion and in life. Sidonia’s Thread uses sewing metaphors to tell the tale of these two women as though stitched together like a handmade garment. Why did Sidonia keep these significant life secrets, and why was Hanna so afraid to ask about them? When Sidonia moves to elderly housing, Hanna steals some of her old letters and photographs hoping to find clues to her paternity, her mother’s reclusive behavior, and her heritage. Combined with a trip to her mother’s Hungarian homeland and a phone conversation with her father, Hanna’s surprising discoveries inspire a revised view of her life with her mother, replacing her conflicting emotions toward her mother with true reverence.

Additional information and reviews may be found at the following sites:

Author interview and background from the MASS Live blog. Notes that Sidonia’s Thread was named the Best Non-Fiction Kindle Book for 2014.

Welcome to our spring Shabbat mornings where almost every Shabbat from now until June 18th includes a special celebration for one of our seven B’nai Mitzvah students.

Emily F. did a great job with her Acharei Mot Torah portion on May 7th.  Max is next with Kedoshim. Then comes Adin with Emor and the twin Jeremy and Marisa with Behar.  Taking a week off the first Shabbat of June, we then find Emily B. with Bemidbar and Jane closing us out with Naso.

Remember, please, that these mornings are not “private” services, that you do not have to have received an invitation in order to attend.  Invitations that families send do, indeed, announce the service, but they also include information about family parties, which are, of course, private affairs. Shabbat services, themselves, and the Kiddush reception following, are open to all.

Do join us on Shabbat morning when we’re especially festive and, definitely, doing our very best . . . . and, come celebrate these life milestone events with our wonderful students and their families.